Budget blues - let's stick together and defend our rights at work

The Barnett Government's budget is full of bad news for patients and health workers, with its plans to cut funding equivalent to thousands of jobs over the next four years.

The government's so-called Workforce Renewal Policy will cut $424 million from the health budget over the next four years, equivalent to over 5,000 jobs.

In addition, the government expects an extra 1% efficiency dividend each year, which amounts to a further $192 million cut, equivalent to 2,400 jobs.

The budget forecasts a spending increase in health of only 1.3% a year, far below the rate of inflation, which is currently around 2.5% a year. As reported in The West Australian, this is the "lowest increase in living memory".

At the same time, the budget forecasts an increase in patient numbers of about 3% a year.

Put simply, this means there will be less money and less staff expected to service more patients. It simply doesn't add up!

What this may mean for you as an employee is hard to say. You should expect to be notified and consulted about any changes to your duties, your workload, the structure of your department, and more.

You will need to be vigilant because the employers will not always tell us, and will sometimes try to bully you.

You should advise the union if a vacant position is downgraded, especially if the duties on the JDF are not changed to reflect the lower classification.

The Union can appeal to the Public Service Arbitrator "...in respect of a decision of an employer to downgrade any office that is vacant." (Section 80E(2)(b) of the Industrial Relations Act). But you need to let us know.

If your duties are changed or there is an expectation of unreasonable and unfair increases to workloads, contact the union office for advice.

By making these cuts to health spending, the Barnett Government is making a choice to create longer waiting lists for patients, and a reduced range of health services, and demonstrating a progressive attempt to downskill the health workforce and pay them less.

If we are going to be effective in our responses to these ongoing challenges, we need to get organised. We need to work together.

Think about your workplace. Is it likely that you will get a better outcome on your own or working with your colleagues?

Workplace change is always a challenge, but if we stick together we can make bad situations better.

If you don't have one, you need a Workplace Rep, and make sure everyone who can be is a member at your workplace.

Keep the union office informed about any changes.

If there is change you want to deal with, call a meeting of members, let the union office know and let's work together to defend our rights at work.

To listen to Dan Hill's response to the budget click on the image below or here. 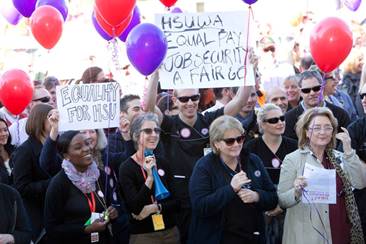