Joshua Fleay has been a HSUWA Delegate at the Australian Red Cross Blood Service since June 2011. In that time Josh actively participated in a very intense enterprise bargaining agreement campaign in which an application for a protected action ballot was lodged and protected industrial action was subsequently taken in the workplace.

Josh organised his members to successfully campaign for a "No" vote when the employer arbitrarily put the agreement out to ballot whilst the negotiations were still ongoing.

As a result of this, the employer made an application to FWA to deal with a bargaining dispute under Section 240 of the Fair Work Act 2009. Josh appeared and represented the members in Conference as part of a conciliated outcome of the bargaining dispute, which resulted in members finally getting a well deserved pay offer.

In mid 2013 the Red Cross made a decision to suspend payroll deductions of membership subscriptions with very little notice. Josh was able to encourage a large number of members to change over to direct debit or another form of payment to ensure the continuation of their Union membership. This task, proved to be a challenge and required discrete follow up with members.  Effectively, when payroll deductions ceased, people had to re-join the Union.

In November 2013 the Red Cross made an announcement that a significant restructure is going to occur with a considerable number of positions being made redundant. Josh has provided constructive support to members, offering advice and information and organising union meetings.

Josh is a Delegate who has the full support and respect of members in his workplace and a thorough appreciation of what his employer is likely to do.

Above all, Josh is a thoroughly decent young man who has a great future as part of the modern face of the union movement. 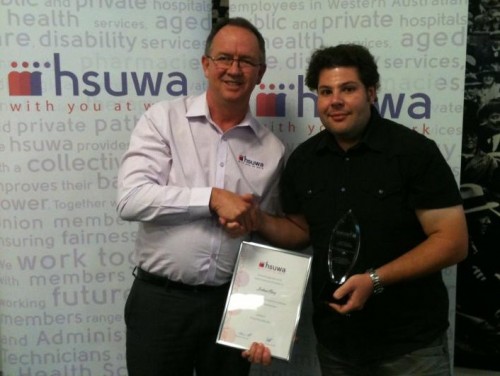