The HSU National has made a submission on behalf of all HSU branches, including HSUWA, to express concern about potentially adverse changes to funding and other arrangements by the Abbott Government.

In the submission, the HSU National reaffirmed its support for a health system that is universal, equitable, affordable and fair for all Australians.

It stated, that while it acknowledged that "Australia's health system is far from perfect, the policy reforms proposed by the Abbott Government are evidence-free and ideologically driven. If implemented, they will create a far more inequitable and inefficient health system."

It also stressed that the Abbott Government's alarmist claims that Commonwealth health expenditure is unsustainable is a myth.

The submission states, "The Australian Institute of Health and Welfare (AIHW)... found that in 2012-13 government funding of health expenditure fell in real terms for the first time in the past... driven predominantly by a 2.4 per cent decline in Commonwealth funding. Additionally, it found that 1.6 per cent of total health expenditure was shifted from government to non-government sources, with individuals contributing slightly over half of this in the form of out-of-pocket costs. Individuals are now contributing 17.8 per cent of total health expenditure, which represents the highest share that the Australian people have contributed in a decade."

It also noted that given consumers are paying nearly $1 out-of-pocket for every $5 spent on the health system, the Government's claim that Australians are somehow unaware that their use of the health system incurs costs is ludicrous.

Overall, it says, "The HSU National is extremely concerned that the Abbott Government's discussion of health policy and expenditure is becoming increasingly divorced from the economic benefits of effective and equitable health systems. In high-income countries like Australia good health outcomes contribute to higher productivity, greater labour supply, improved skills through greater education and training, and, most importantly, good overall population health leads to increased funding available for investment in physical and intellectual capital.

To view a copy of the submission, please click here. 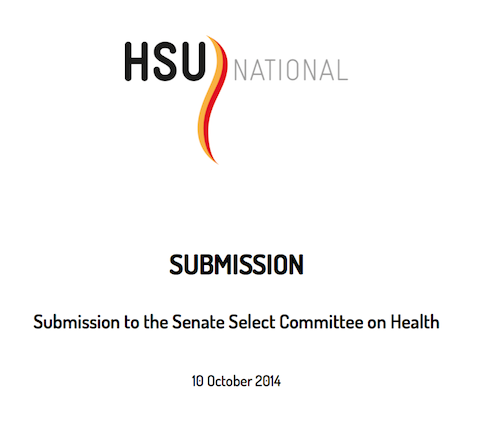