Members rallied at Parliament House on Wednesday 25 June and voted to escalate industrial action if the State Government does not offer a wage rise of more than 2.75% by Friday 4 July.

Up to 600 members voted to take a series of rolling stoppages commencing in the week of 7 July.

HSUWA Secretary Dan Hill said the 12-hour stoppages would be held from 6am-6pm at the state's biggest hospitals and over several days.

A pay offer was received late on Tuesday 24 June from the Department of Health, and members rejected the offer of 2.75% in the first year and 2.5% in the second year. There was no offer to improve employment security.  A copy of the offer is here

Members at the rally also voted to immediately escalate the statewide implementation of coordinated work bans.

Carried unanimously at the meeting of HSUWA members at Parliament House:

1. Notes that the Government offer received late on 24 June 2014 does not satisfy the endorsed HSUWA claim for increased pay and job security.

2. Confirms our salary claim is for 9% over 2 years with more secure employment.

3. Rejects the arbitrary application of the Barnett Government's unfair wages policy and the restriction placed on the Department of Health's capacity to negotiate in good faith.

4. Calls on the Government to agree to 1 July 2014 as the effective date for any pay increase without condition.

5. Calls on the Government to guarantee that there will be no forced redundancies in the next two years.

If the government does not make a reasonable offer by Friday 4 July 2014:

1. Resolves to implement rolling twelve hour stoppages (6.00am to 6.00pm) of members across the state and commencing in designated metropolitan hospitals in the week of the 7 July 2014, while maintaining work essential for patient safety.

2. Authorises the Secretary to take all actions necessary to implement these resolutions and to organise further action, including further stoppages, for the purpose of bringing the Government to make a fair and realistic offer on pay and job security. 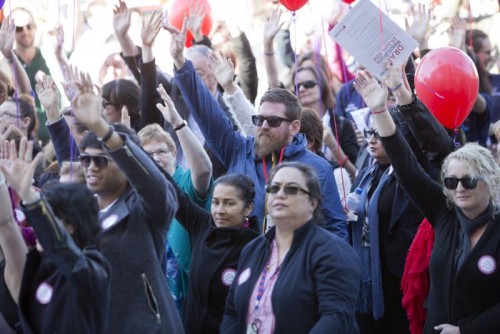