We are pleased to report that the WA Industrial Relations Commission today awarded wage increases of 3.75%, effective 1 July 2014, and 3% from 1 July 2015, to be paid to HSUWA members.

The Commission's decision followed the arbitration hearings held in February.

This is a great win for HSUWA members who were prepared to take the Government on over their stubborn refusal to consider wage increases similar to those given to nurses and doctors.

Following work bans, stop work meetings, the mass rally at Parliament House and strikes at SCGH and RPH, the intervention of the Commission in July 2014 resulted in the Government agreeing to the Commission's recommendation, and members achieving an interim pay increase of 2.75%, effective 1 July 2014 for the new Agreement and arbitration of the wage increases to apply.

In awarding the increases, the Commission considered the union's fairness and equity arguments outweighed those of the State Government's capacity to pay and the state of the WA economy.

HSUWA staff and members who provided witness evidence are to be congratulated on a job well done. Any increase above government wages policy is a great achievement, particularly in the current economic environment.

HSUWA members have delivered a fair wage increase to some 16,000 WA Health employees.

However, we cannot afford to rest on our laurels, as negotiations for a replacement EBA begin from 1 January 2016.

The current Agreement expires on 30 June 2016 - the same date as the nurses' EBA, and all the indicators predict the economic conditions in WA to worsen before they get better.

We have commenced preliminary work on the 2016 Agreement, and will be formulating our claims during September and October this year.

Congratulations once again to all involved in the case. Thanks to our legal team at Slater & Gordon, Simon Millman and Daniel Stojanoski and Senior Counsel, Mark Ritter. 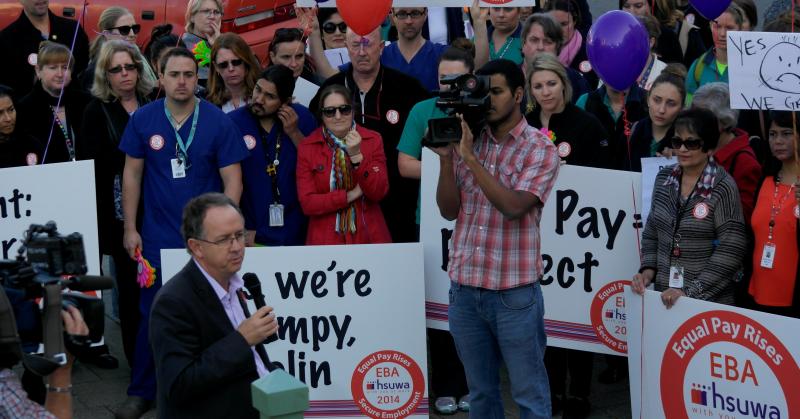