Did you know that the pay rise on 2 July 2013 was your last guaranteed pay rise?

Together, we won these pay rises in 2011 through our campaign, including the mass meeting of over 1,000 members at the Perth Convention Centre in July 2011. 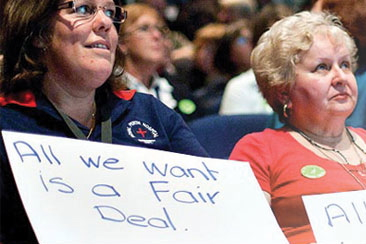 As you know the State Government has announced a new wages policy to apply from November 2013 that will enforce a cap on the public sector wages bill and limit wage increases to inflation only (currently 2.4%). Whilst the detail hasn't been released yet, the new policy will apply to our next round of EBA negotiations.

Once again the collective strength of HSUWA members will be critical in delivering a fair wage outcome in 2014. Do you think you're worth more than inflation?

We will advise soon about some of the steps to the claims and agreement making process and how you can get involved.  You can, of course, let us know now what you think we should include in the log of claims by simply emailing us at union@hsuwa.com.au.

You can also let your colleagues know, especially those who are not yet HSUWA members.  Everyone knows a stronger union means a better deal for you.

You might also be lucky like Julie Jenaway from Armadale Hospital who signed up a new member and won $250.  Just make sure your name goes on the application form.

The 2 July 2013 pay scale can be found here.  If you cannot open this link, please email union@hsuwa.com.au and we will email you a copy.