The union and WA Health have finalised discussions about the terms of the proposed new Industrial Agreement (the Agreement) for members employed in WA Health.

The application for registration of the Agreement and arbitration of the salary rates has been lodged with the WA Industrial Relations Commission (WAIRC).

The Agreement includes necessary administrative changes but no substantive changes. The current Agreement (2011) continues to apply until the new Agreement is registered.

We expect the interim Agreement to be registered within three to four weeks.

The arbitration of the salary rates will take some months to conclude and the hearing dates will be set by the WAIRC. In the meantime the administrative salary increase of 2.75% will continue to be paid.

The union has appointed lawyers Slater and Gordon to prepare the case for arbitration. The case for the union will be presented by the former President of the WAIRC, Mark Ritter SC. Mr Ritter successfully argued the case for the United Voice in the arbitration of their EBA in 2013.

The arguments for the salary increases flow from the contribution of HSUWA members to the unprecedented level of changes within the public health system, including new hospitals and services, service reconfiguration, funding changes, efficiency improvements by changes to work design and work practices, significant and ongoing productivity improvements in health service delivery and other changes, all of which are, according to Government, directed toward delivering better and more efficient and productive health services.

The union is also seeking equity in the level of increases in pay rates in comparison with other employees in the health sector, including wage increases provided by the government to Registered Nurses and Doctors, the rates arbitrated for United Voice members in 2013, and the rates agreed in 2014 for Enrolled Nurses, Assistants in Nursing, and Aboriginal Health Workers.

We will advise further once the new Agreement is registered and hearing dates have been determined by the WAIRC. 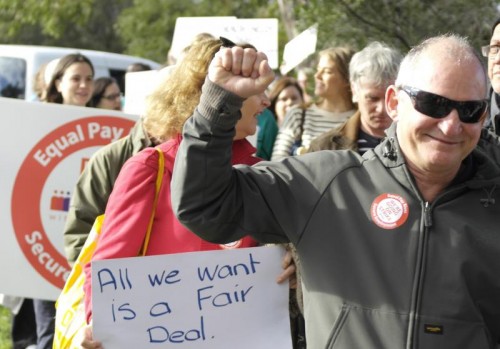