What is a PRF and why does it matter?

The HSUWA is in formal consultation with the Health Industrial Relations Service regarding the commissioning of Fiona Stanley Hospital. One of the areas for discussion has been around the transitioning of staff to the new hospital. This process was supposed to include the completion of Preference Registration Forms (or PRFs) by all staff at Royal Perth and Fremantle Hospitals. PRFs are forms that capture information about your work and qualifications and require that you indicate where you'd like to work.

The Health Department has now advised that those who have completed PRFs and indicated that they want to stay at RPH or Fremantle will be given preference for jobs remaining at those hospitals after the opening of Fiona Stanley. This means that it's possible for the best qualified and experienced person to miss out on a job over their less qualified or experienced colleagues who completed the paperwork. It seems that they regard the paperwork as more important than the person.

If there are more workers than jobs then it is usually best to have an open and transparent merit - based appointment process. The Union also believes that there is some confusion about the process, as the HR Transition Unit sessions seemed to communicate different information.

If you work at Royal Perth (either campus) or Fremantle Hospital and have NOT completed a PRF, please let the HSUWA know via email at union@hsuwa.com.au 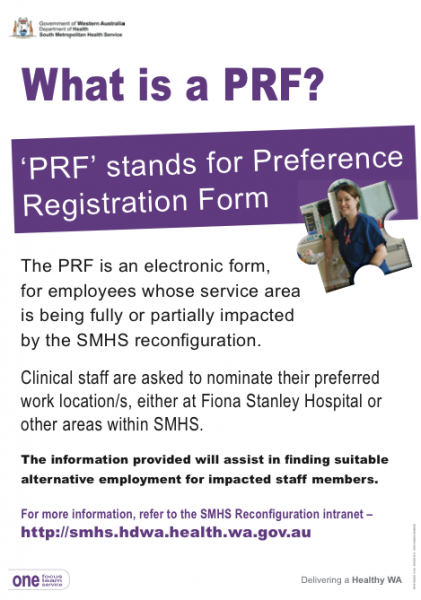